Hydrogen has a long history as an energy source, powering the first internal combustion engines over 200 years ago to becoming an integral part of the modern refining industry. It is light, storable, energy-dense, and produces no direct emissions of pollutants or greenhouse gases.

Hydrogen's Role in a Zero-Carbon Economy

Hydrogen is the most abundant chemical element in the universe – it makes up around 75% of all normal matter. It is also the lightest element, making it useful in a wide range of industrial applications, including refining, and petrochemicals. In recent years, there has been increasing interest in hydrogen as a fuel source – demand has risen steadily over the past 40 years.

The current strategy of reaching zero-carbon in our energy production is a switch to electrification, with all electricity supplied by zero-carbon methods. Today, direct electricity use accounts for 20% of all our energy, but it could and should grow to around 70% by the year 2050.

However, there are many industries and sectors where direct electrification will be impossible or very unaffordable for the foreseeable future. In some of these, hydrogen can fill in as a zero-carbon alternative to fossil fuels. Examples of these industries include steel production, long-distance shipping, and fertiliser production. Hydrogen can be used in these industries either directly, or in the form of ammonia or synthetic fuels (‘synfuels’) derived from hydrogen.

If this is followed, then total global hydrogen use could account for up to 20% of all energy demand. This, on top of the 70% expected rate for direct electricity, could account for a total decarbonisation by the 2050s.

There are challenges, however. All of this hydrogen must be produced through zero-carbon methods. This would require electrolysis using electricity from zero-carbon sources; this is known as ‘green hydrogen’. Alternatively, hydrogen can also be produced with natural gas, but with carbon-capture technology, to make ‘blue hydrogen’. 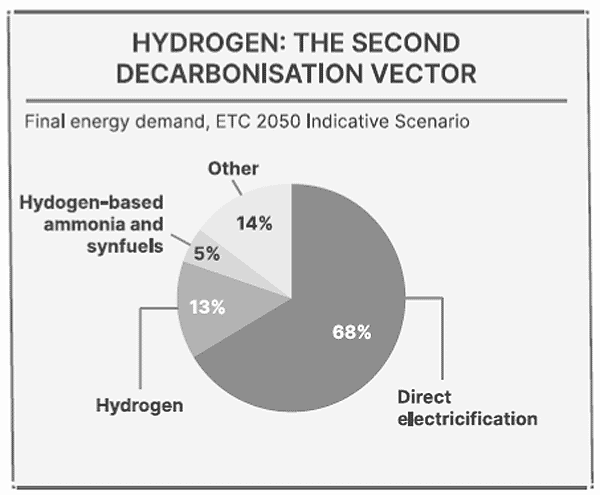 This ‘blue hydrogen’ should be used as a short-term, cost-effective measure during the zero-carbon transition. In the long term, ‘green hydrogen’ will be the ideal, both for eliminating carbon emissions, and for supplying electricity at a low cost – once the zero-carbon transition is complete, green energy will be much cheaper. The cost of producing clean hydrogen is set to fall drastically in the coming years.

The Importance of Hydrogen

Hydrogen is essential to the zero-carbon goal, as it is the most effective method of decarbonising heavy industry sectors where direct electrification is difficult, unreasonably expensive, or outright impossible. For this reason, hydrogen demand is expected to rise dramatically. With the planned zero-carbon economy in 2050, we are expected to use up to 800 Megatons of hydrogen per annum.

Due to inherent energy conversion losses, hydrogen is less valuable than direct electrification for most domestic uses, as it lacks efficiency. However, hydrogen will be particularly sought after as a green alternative for long-distance transport, as it has a high energy density per mass, and lasts for long periods in storage. 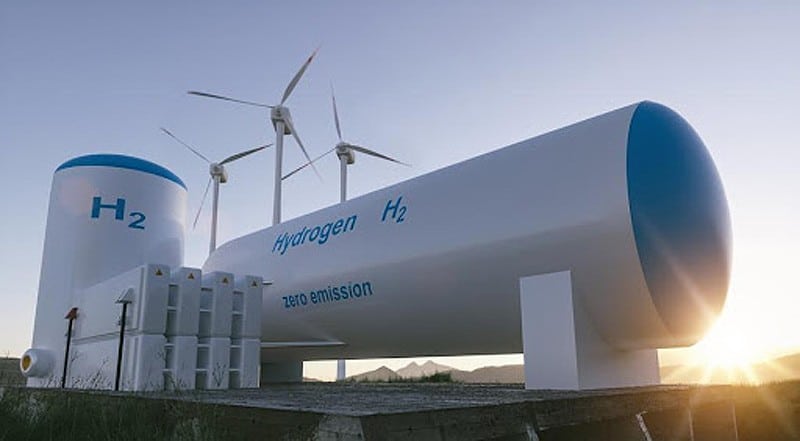 Additionally, hydrogen has a great many industrial applications, and will for years to come. It is a vital component of chemicals such as methanol and ammonia. With its chemical properties and reactivity, it has potential for use in plastics and steel, as a greener alternative to other production chemicals.

Hydrogen itself has a very low energy density per volume, even if it is compressed or liquefied for easier transportation. It can overcome this by being converted to ammonia or synthetic fuels, making it lighter and more convenient for transport and aviation purposes.

Hydrogen is stable and non-toxic, meaning it is mostly safe to use and store. The only concern is that hydrogen is very flammable, and as such, some safety precautions are needed.

The Transition to Hydrogen

A key potential way to transition into hydrogen use is to begin blending hydrogen fuels into our current natural gas grid. The gas grid that exists today supplies our homes and industries with natural gas for heating and industrial purposes.

By blending hydrogen into the mix, we can slowly wean ourselves off our reliance on natural gas over the course of decades. This can be quickly and flexibly implemented, and will rapidly increase demand and investment in clean, green hydrogen.

However, this will only have a small impact on our current carbon emissions. Hydrogen has a lower energy density than natural gas, so its effects will not be felt in the short term. Hydrogen will still be vital to long-term decarbonisation.

Another potential complication is the need for international collaboration. Many natural gas grids cross international borders, such as in the European Union. Agreement and coordination will be needed across nations.

Another concern is the cost to consumers. Hydrogen has a higher production cost, and with general energy costs currently skyrocketing, this is likely to hit the poorest individuals the hardest. Extra investment and careful policy-making will be needed to avoid perpetuating fuel poverty.

Today, most hydrogen is produced via a method called Steam Methane Reforming (SMR), using natural gas. There is only a very small amount of hydrogen produced using zero-carbon methods. 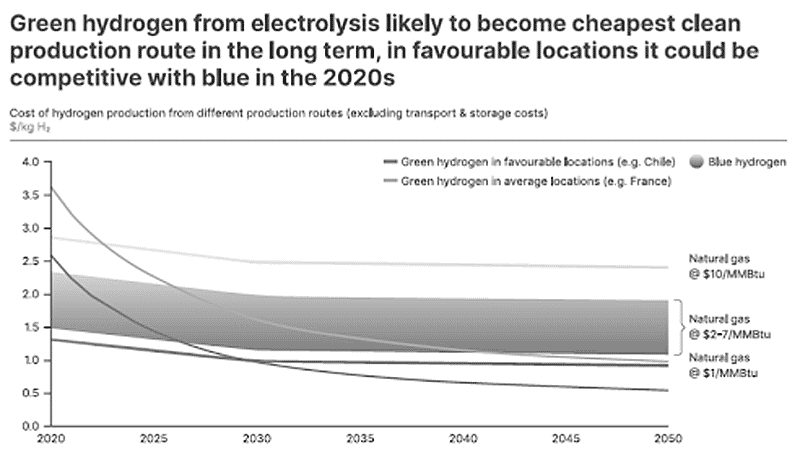 However, with developments in technology, it is likely that green hydrogen will become dominant in the years to come. While it may not be cost-effective in the short term, green hydrogen will begin to undercut ‘grey’ hydrogen (hydrogen produced via fossil fuels) due to falling prices of renewable electricity and electrolysers.

This will not be the case everywhere, however. In locations where renewable electricity is difficult to come across, or not cost-effective, then ‘blue’ hydrogen will play an important role, as a low-carbon option.

There are many different approaches to producing green hydrogen. Electrolysis of water has been a common and long-proven method in hydrogen production. The three main electrolysing technologies are alkaline, proton exchange membrane (PEM), and solid oxide electrolyser cell (SOEC). In theory, any of these methods can be zero-carbon if they use renewable electricity sources. 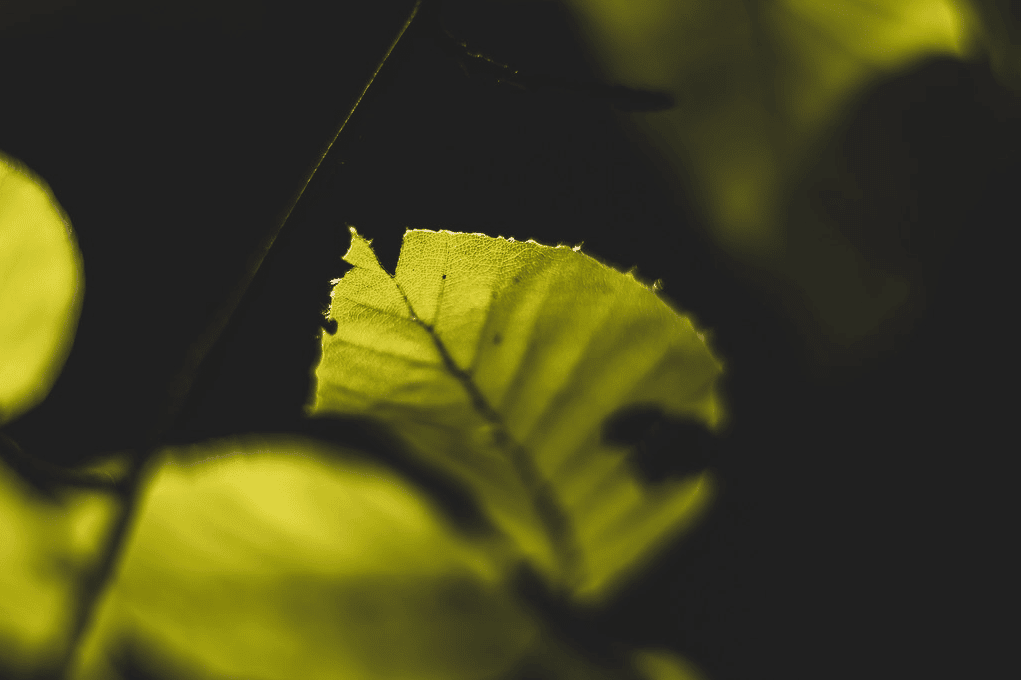 Return to the Energy Home Page

Click the button above to be transported back to the site's energy category page.

Onward to Green Hydrogen in the GCC

Click the button above to move on to learn more about  green hydrogen.